Hail Netting Systems – Everything You Need to Know 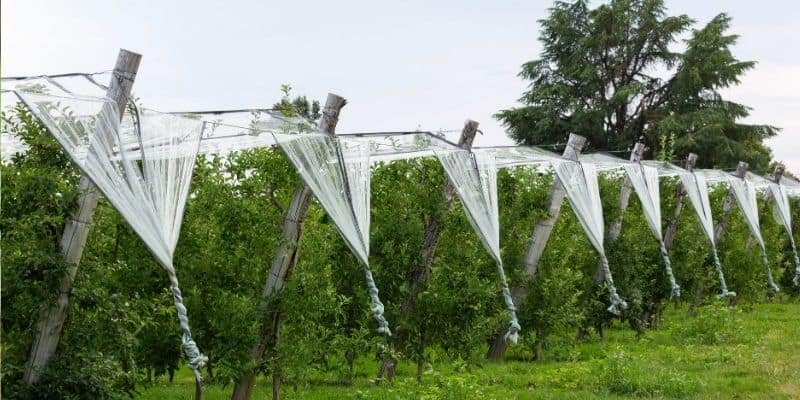 Hail is a kind of solid precipitation, often caused by strong convective weather. Hail occurs most often in the interior of the mid-latitude continents. In tropical areas, hail is often confined to high altitude areas. Hail is also common on mountains, because mountains force horizontal winds upwards, which intensifies the updraft in thunderstorms and makes hail more likely. The higher the altitude, the less time for hail to melt before reaching the ground, so it is more likely to cause hail disasters.

For example, the mountainous area of northern India is one of the most common areas of hail happen and one of the areas with the highest hail deaths on record. In addition to India, China, Central Europe and Southern Australia have also been hit by hail. Other areas where hail often occurs are southern and western Germany, northern and eastern France, southeastern Europe, Croatia and Serbia.

In North America, Colorado, Nebraska and Wyoming have experienced multiple hail attacks, so this place is called “Hail Lane“. The most hailstorm prone city in North America is Cheyenne, Wyoming, with an average of 9 to 10 hails per season. In the downwind of the Rocky Mountains-the Hailstorm Alley area of Alberta, large-scale hailstones often occur there.

Hail often has obvious seasonality and often occurs in spring and summer. For example, hail in southwestern Europe always occurred in May, and then the frequency of hail gradually decreased. After September, hail rarely occurred.

Once hail occurs, the hail disaster may cause two kinds of damage to the orchard.

What is the hail netting System?

If fruit trees suffered from hail, it may cause broken branches, leaves and fruit damage. In severe cases, it may cause large pieces of fruit to fall and rot, or even damage the fruit trees, which will seriously destroy the fruit trees that have been planted for many years and affect the fruit production in the next few years. Therefore, under normal circumstances, in order to avoid these losses, orchards need to install anti-hail systems early.

The anti-hail system is a professional system designed for the hail damage and prevents hail from destroying fruits and fruit trees through physical shielding.

What is Raschel Anti Hail Net?

The Raschel anti hail net refers to the anti-hail net woven by the Raschel warp knitting machine. Its woven structure is shown in the figure below.

Because of the difference in the weight of the net and the shape of the mesh, the function and the output of these two kinds of nets are also different:

The anti-hail system has been widely used in orchards all over the world for many years. It not only can effectively prevent hail damage to the orchard, but also has a little anti wind function, anti insect and a certain degree of shading effect, which improves the quality and yield of fruits.

Helen’s family runs an apple orchard in North America and has experienced four hail disasters in the past six years. Finally, they had to install anti-hail nets on the apple trees.
Helen (the owner of the farm) said:

“Years of disasters have forced us to find a solution. We can no longer bear the loss!”,
“We chose a transparent anti-hail net. Hailun nets, the results were good. When the last hailstorm happened, we hardly suffered any loss, and our apple trees were safe.”

Helen also believed: “These nets not only prevent hail, but also provide protection from other damages, such as sun-shading, anti-bird, and anti-insect”,
Helen said ” the apples we produce are better than previous years”

From 2014 to 2015, two types of pear trees were tested in the northeastern part of Macedonia. Some of these pear trees were installed with a transparent anti-hail net, while the other part was not installed. After the occurrence of hail, the drop rate of pear trees that were not covered with anti-hail nets reached a percentage of 40% -48%, and only 5% -8% of the fruits were not damaged.
Most fruits have three or more wounds. The pear trees that used anti-hail nets did not receive hail damage.
In addition, the flower bud differentiation, fruit setting rate, and yield of trees covered with hail nets are higher.
Moreover, these anti-hail nets also show effects in the next year.

Eyouagro anti-hail system provides a complete set of anti-hail solutions for your orchard. We not only produce anti-hail nets but also prepare all the necessary accessories for you. This system can protect your orchard from hail disasters and avoid serious economic losses. It also has the functions of shading, anti-wind, and anti insects except for anti-hail.

The Author >>
Kevin Lyu
Hey, I’m Kevin Lyu, the founder of Eyouagro.com , Family-run business
An expert of agriculture protection textile specialist .
In the past 24 years, we have helped 55 countries and 150+ Clients like farms, orchards , vineyards to protect their plants. The purpose of this article is to share with the knowledge related to agriculture growing protection for making the plant healthier and stronger.
PrevPreviousThe Ultimate Guide of Aluminet Shade Cloth 2021
nextHail Net Investments – Worth or Not?Next
EyouAgro Agriculture Protection Textile Specialists

UV Covering for Your Greenhouses – What Are They?
Read More »

How to Import Agricultural Protection Netting from China: The Ultimate Guide 2021
Read More »

Ultraviolet Light (UV) – Is It Good or Bad For Your Plants?
Read More »

Let's Have A Chat